On Friday I went to one of the last of the London mayoral hustings before the election on 5 May, co-organised by London Cycling Campaign and hosted by The Times in their building on London Bridge Road. There were three of us from Enfield Cycle Campaign: David Hilliard and Andrew Larssen, who both cycled from Enfield, and myself (Clare Rogers) who chickened out and took the train. 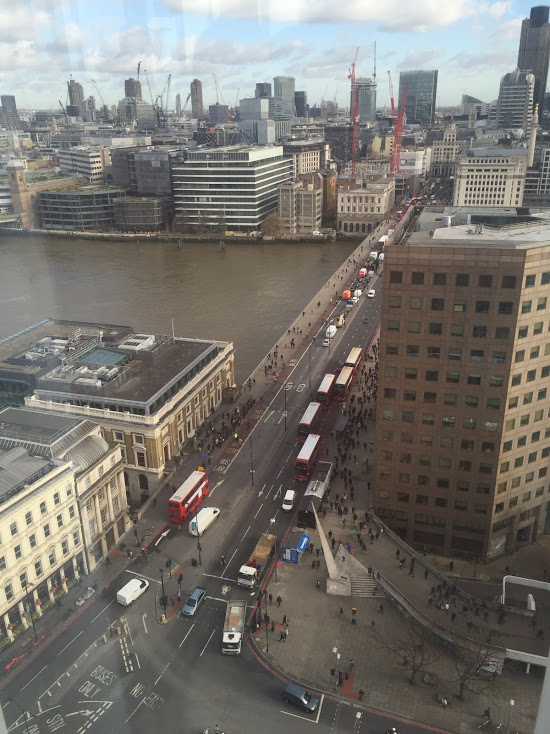 View of London Bridge from the 14th floor

The focus of the hustings was cycling and transport. We all went with the question – what will a new mayor mean for cycling in London generally, and specifically for Enfield’s Mini Holland?

The meeting was opened by LCC’s Ashok Sinha with a brief summary of London’s recent cycling history. It was the LCC Love London, Go Dutch campaign for the last mayoral election that directly led to the 2013 Mayor’s Vision for Cycling, with its segregated cycle superhighways and three ‘Mini Hollands’ for outer London boroughs. And again in 2016, all mayoral candidates have signed up to LCC’s pledge for better cycling in London – including a Mini Holland for every outer London borough that wants one. 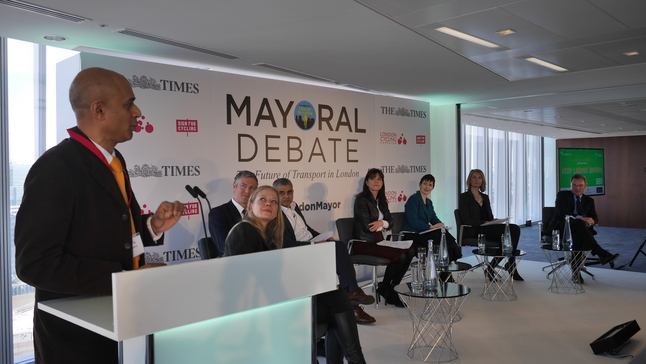 All six mayoral candidates had two minutes each to give their mini manifestos. The candidates were evenly split between men and women: Sian Berry (Green), Caroline Pidgeon (Lib Dem), Sophie Walker (Women’s Equality Party), Zac Goldsmith (Conservative), Sadiq Khan (Labour) and Peter Whittle (UKIP). I won’t try to cover what everyone said – for the full debate, go here. I will say that the women easily outperformed the men, and Caroline Pidgeon was particularly impressive. Sian Berry’s commitment of 15% of Transport for London’s budget for cycling, and to ‘people-friendly’ walking and cycling investment in every borough, was the best offer on the table. 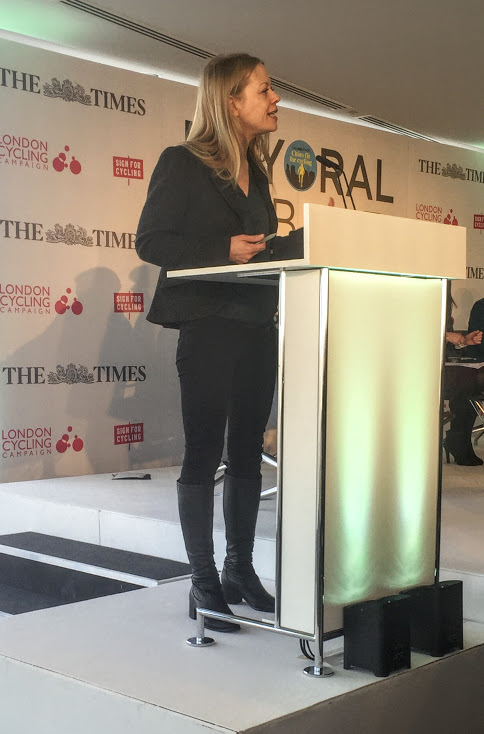 Sian would give 15% of TfL’s budget over to cycling

It seems that many who ‘vote bike’ will vote first for Sian, and then a tactical vote for one of the two frontrunners, Zac or Sadiq. The question is: which one?

I found Sadiq disappointingly vague in his manifesto. After an exciting opening statement that he wanted to make London a ‘byword for cycling’ on a par with Amsterdam and Copenhagen, he was the only candidate not to put a figure on TfL’s spending on cycling. He said that he didn’t want to commit anything until he knew what the budget will be, and that his strategy would be to save money by shaking up TfL inefficiencies, such as paying too many consultants.

Zac was much more specific, including a commitment to spend at least as much as Boris on cycling (£100 million a year over four years). However, while he has signed up to LCC’s pledge, he qualified his commitment to Mini Hollands by saying he would put them in ‘where there is engagement by the local community’. He went on to say that TfL’s consultations have been ‘arrogant’ and the cause of community opposition. I wondered what exactly this meant, given the opposition Enfield’s Mini Holland is facing. Would boroughs simply not qualify for funding if enough residents opposed the Mini Holland ideas with enough noise?

When it came to taking questions I held up my hand until my arm ached but didn’t get picked, so I made a beeline for Zac at the end as he got off the stage. 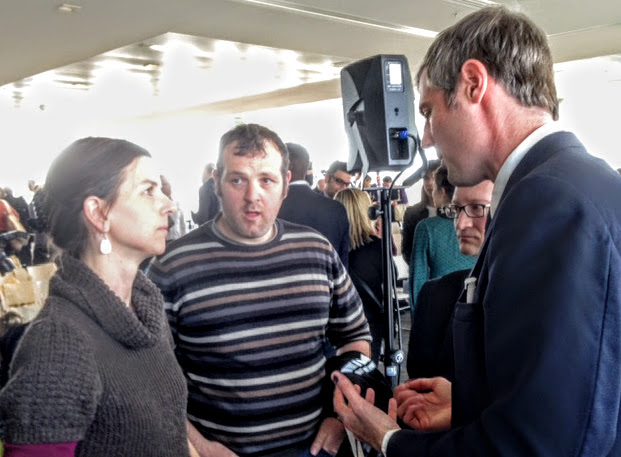 We ask Zac: What about Enfield’s Mini Holland?

‘If you were mayor, what would happen to Enfield’s Mini Holland?’ I asked.

The gist of his answer was that decisions like that should be ‘left to local authorities’, and in Enfield’s case, the Mini Holland might end up going back to the drawing board and looking a ‘little different’.

This chimed with an earlier answer he had given about 20mph zones. Sian and Sadiq would implement them across London, whereas Zac said it would depend on each local authority.

Here’s my problem with this approach, which crystallised in my mind after a discussion with LCC staff: leaving everything up to local authorities just won’t work. If schemes are opposed locally, councils could water them down or simply fail to carry them out. Transport for London is not being ‘arrogant’ by rolling out the Mayor’s vision – it is ensuring that urgently needed schemes are put in place are to make space for walking and cycling on our streets, and refusing to let them be diluted. If a Mini Holland borough does not demonstrate that its scheme will be ’transformational’, it will not get the funding. That’s why Enfield Town will, hopefully, lose the three lanes of car traffic going through its high street and gain a nice place to shop – despite the local outcry. This part of the scheme is transformational, and thankfully, TfL would not allow Enfield to water it down even if it wanted to.

Would a TfL under Zac have this kind of backbone? 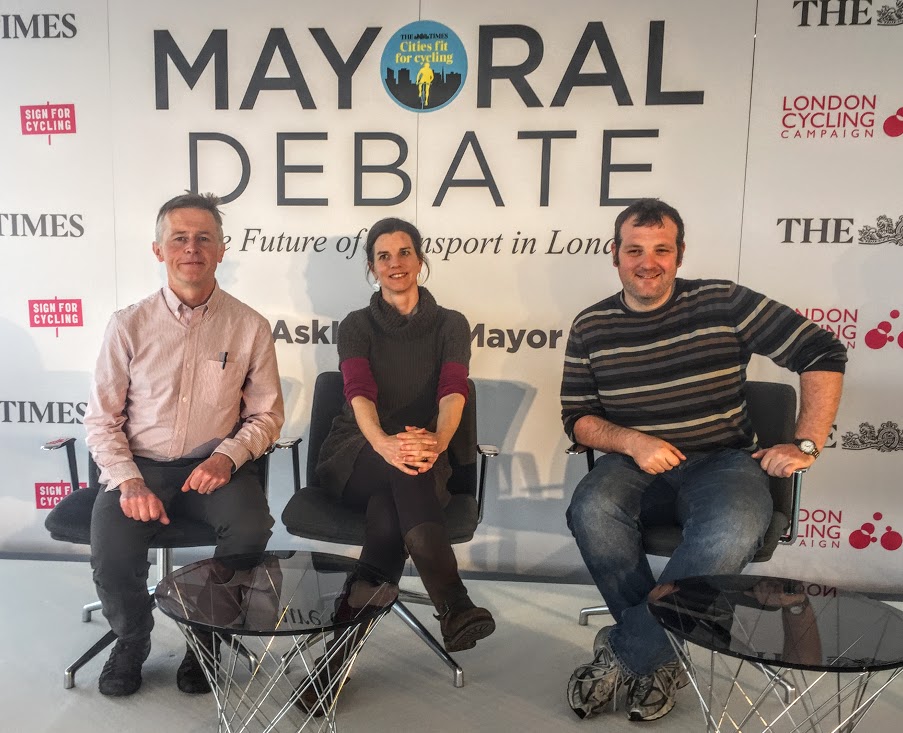 Enfield Cycle Campaign has a cheeky photoshoot on the stage 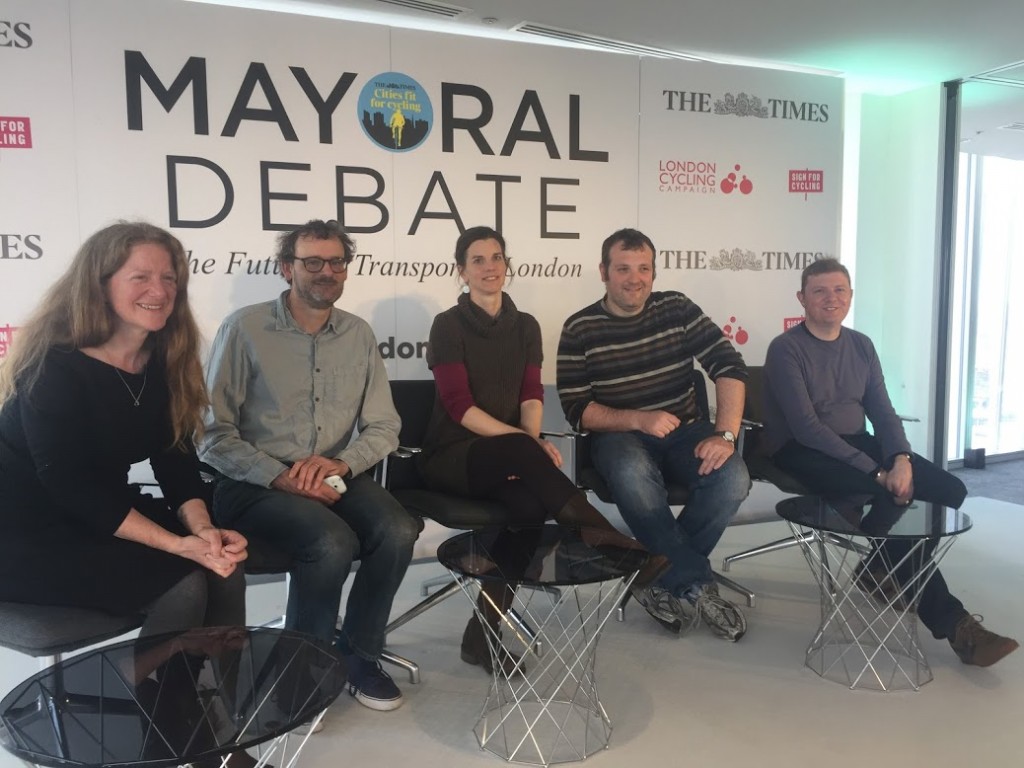 5 thoughts on “Who would be the best mayor for cycling?”