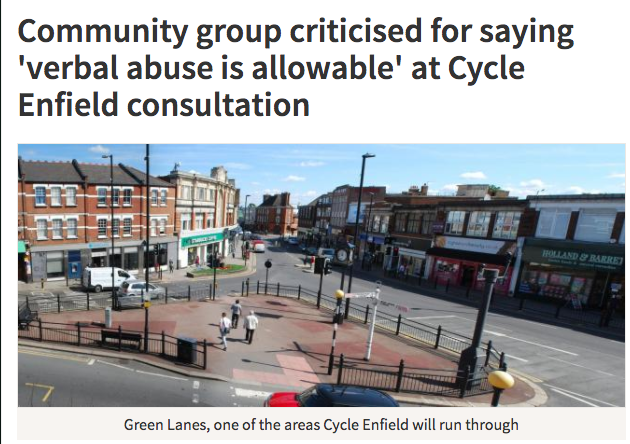 Is it true that the council are “not listening”?

These campaigners may not like the scheme, but there is no excuse to sink to these lows. Neither is there any evidence for their claims that it will damage local business, or that the council have “not listened” to the public.

Evidence that cycle lanes benefit business has convinced Microsoft, Unilever and Coca Cola Europe (among many others) to publicly support London’s cycle infrastructure. Why do local shopkeepers on Green Lanes think they know more about attracting customers than these business leaders? The fallacy that cycle lanes will hurt the local economy has been roundly disproved. So who is it that’s not listening?

Cycle Enfield has made significant adjustments to the proposed routes in response to each consultation. They are taking time to revise the Enfield Town plans after that consultation drew a significant negative response. What they haven’t done is caved into those who oppose the whole thing. This is to the council’s credit: there is a clear and urgent need to rebalance Enfield’s unhealthy driving habits with other, cleaner, more active forms of transport.

What does the community really want?

We’re fed up of these objectors saying they represent “the community”. For the 350+ in Better Streets for Enfield, and many others we have spoken to, they do nothing of the sort. Young people in particular support the scheme: the consultation responses from 18 to 24-year-olds have been overwhelmingly positive. Families with young children, in our experience, seem to be strongly supportive too. However, this sector of the population are leading busy lives and have less time for political engagement than Cycle Enfield’s opponents, who are older on average, and many of whom are retired.

Lots of Enfield residents want better walking and cycling in the borough, for better, healthier streets. Opponents need to back down now and let Cllr Anderson his officers get on with providing exactly that.