The Cycle Enfield / Mini Holland plans have triggered a lot of debate locally, generating strong feeling for and against. Here are some of the questions people are asking:

See also our page of evidence and facts. (And check out this website devoted to answering common questions about cycling.)

Won’t there be more congestion if the road is narrowed for cycle lanes?

No – in fact, increased congestion (and pollution) is exactly what we’ll get if the cycle scheme doesn’t go ahead, and we continue to depend so heavily on cars for transport. Enfield’s growing population (by 5,000 a year) will mean more congestion and pollution, and less available space for parking. Providing safe cycle lanes as an alternative means of transport is a Transport for London strategy to address that problem, not just in Enfield but across London.

Yes, the roads with cycle lanes will be narrower for motor vehicles, although still wide enough to allow buses to pass safely – and in fact reduced road width is known to reduce speeding. But the crucial point is this: for the first time, there will be space for people of all ages and abilities to cycle safely on those routes. Enabling more people to cycle is simply a more efficient use of space on the road, as a bike takes up the fifth of the space that a car does. As more people switch from driving to cycling for shorter journeys, the congestion we are currently experiencing will decrease.

Moreover, traffic modelling has shown that when the Green Lanes/A105 scheme is in, for instance, car journeys along the route may increase by at most (at peak hours) by 2.5 minutes for the whole route. Smarter signalling at junctions using the SCOOT system will help to smooth traffic flow. And this does not take into account the effects of people switching from cars to cycles for some journeys.

Currently, the A105 is effectively single-lane in each direction for much of its length anyway, due to the quantity of on-street parking.

What about buses stopping in the carriageway? Won’t that delay journeys?

Taking this into account, the traffic modelling still shows very little delay in overall journey times for cars. And bus journeys may speed up, since buses will not have to wait for passing traffic to give way before pulling off from a stop. Again, since bike lanes have been shown to relieve traffic congestion, all road users should benefit in the long term.

What about air pollution?

Enfield’s worrying levels of air pollution, especially near schools, is one compelling reason to make it easier for more people to travel without polluting, on foot or by cycling.

As discussed above, cycle lanes should reduce congestion – and therefore air pollution from vehicles – as more people find it convenient to make short journeys without a car.

The air quality impact assessment for Cycle Enfield found that there should be an overall reduction in emissions from the scheme if it meets the target of 5% of journeys switching to bike/foot. The reduction will only by a small percentage , but worth doing if it means fewer people suffering respiratory disease and dying prematurely.

Why do the cycle lanes need to be on main roads?

if we want more people to cycle, we absolutely must have cycle lanes on main roads. If cycle routes do not go directly to where people want to go, people won’t cycle. If you create cycle routes down the back streets and round the houses, people will ignore them and continue to find driving more convenient.

Green Lanes, for example, is perfect as a cycle route. It takes you to shops, stations, schools and links several town centres. It’s wide and, importantly for cycling, it’s flat. Why should such an important transport corridor be exclusively for cars?

The Cycle Enfield plans for Green Lanes (A105) are sound designs based on internationally proven principles. Look at any town where people cycle en masse and you will find that bikes and pedestrians are given the most direct routes – which means cycle lanes on main roads. The senior planner from The Hague who spoke at the Cycling Towards a Better Enfield conference earlier this year gave many examples of exactly that – from a city that has succeeded in making cycling safe and attractive for everyone.

We often hear this question, along with, “It would be much nicer for people to cycle in the park, or on off-road greenways, than on main roads.” That’s true for cycling as leisure, and there will be a network of ‘greenways’ linking main route in the finished scheme. However, the point of the Cycle Enfield is to encourage more people to cycle to get from A to B.

Passengers will have to step off the bus into the cycle lane!

This is a model that has worked without incident in cities all over the world. In Enfield, the strip of cycle lane that passengers will cross are called ‘bus boarders’. They will be clearly marked to give priority to passengers over cycles, as well as raised to pavement level (or else passengers step onto a strip at pavement level, not the road), so that cyclists have to give way to bus passengers when it is in use.

However, in busier parts of the route there will be ‘bus bypasses’, where disembarking passengers step onto an island and cycles are routed around the back of the bus stop. Enfield Cycle Campaign would like to see more of these in preference to bus boarders in the busiest areas.

Won’t it harm local business to lose parking to cycle lanes on the high street?

This has been a concern for some business owners on Green Lanes in Palmers Green. It was rumoured that ALL parking would be removed from the high street. However, under Cycle Enfield’s proposals most parking places will remain, either on the high street or in off-street car parks, such as Lodge Drive in Palmers Green, that will be signposted and accessible for short stays. See the Cycle Enfield website for more details.

Local shopkeepers have overestimated how many of their customers come by car. Some businesses on Green Lanes thought it was 88%; but two separate professional surveys of visitors to the high street found that only 21-30% were arriving by car. See the Economic impact assessment by Regeneris Consulting (Section 3.10).

The A105 economic assessment found that there was a potential uplift in spending in town centres along the route of 10-15%, thanks to a more attractive high street bringing more custom.

Many studies have shown that better space for cycling on high streets has meant more spending in local shops, not less – even when parking spaces are reduced. People shopping by bicycle tend to spend less in one trip than those in cars, but they shop more frequently. High streets that cater to cyclists are also found to be more pleasant places for pedestrians too, which attracts more people to the shops. And those who drive to the shops will benefit from less congested roads and more parking places.

The research is compelling. In New York, retail sales increased by 49% when cycle lanes were installed.  Another report pulls together 12 studies of the effects of cycle lanes on businesses: ‘The complete business case for replacing parking with cycle lanes’. It found that cycle lanes either boosted or had no effect on sales.

Here are some more:

Wouldn’t the money be better spent on the NHS?

First, Cycle Enfield money can’t be spent on anything but cycling and walking – that’s what it was given for. So we either spend it to make streets safer for cycles and pedestrians or we don’t get it at all.

Second, making more journeys by bike has a clear impact on health. Air pollution (mostly from traffic) causes over 9,000 Londoners to die prematurely each year. And obesity is a modern health epidemic. Exercise by cycling can prevent obesity and heart disease and improve health at all ages. Experts told the UK parliament that the NHS could make £4 of savings for every £1 invested in cycling. If the UK invested as much as the Dutch do in cycling, the NHS could save £1.6 billion per year.

Finally, space for cycling prevents accidents. One study found there were 89% fewer injuries to cyclists where bike lanes are protected. Pedestrians are also far less likely to be hit by a bike using the pavement, and car drivers don’t have to worry about hitting cyclists in their lane.

You won’t get me on a bike!

No one is forcing you to cycle! For some journeys and some people, driving will always be the better option – and a matter of personal choice. In fact, you will benefit as a driver the more people switch from car to bike or foot for some journeys – giving everyone else more space on the road.

There are plenty of other benefits to the scheme for people who will never cycle. For instance, the Quieter Neighbourhoods part of the scheme will aim to calm traffic in many residential areas so that neighbourhoods feel like communities again and children can play safely in their own streets.

And there are clear benefits to the local economy of more attractive, people-friendly high streets (see above  – ‘Won’t it harm local business…?’).

Cycling isn’t practical – what if you have children or shopping?

This is a common view in the UK because we don’t see cycles used for daily journeys and chores. We tend to buy sporty bikes that have no way of carrying shopping or children. But in cycle-friendly cities such as Copenhagen, there is nothing extraordinary about carrying a child or two and your shopping on your bike – many bikes come with baskets, backracks for panniers, seats for children, chainguards to keep your clothes clean, and so on. They also tend to be sturdier in design.

This video of a Dutch woman carrying three children and some shopping on her bike (wearing heels!) is an example of everyday life in the Netherlands.

It’s easy to fit our bikes with racks, baskets and bike seats – or perhaps to invest in a cargo bike or tandem. All of these options make more sense when we have enough safe space on the road to use them in. 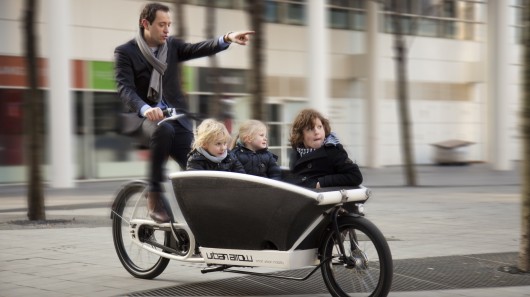 The Urban Arrow, a type of cargo bike

What about people with disabilities?

When the scheme is in, Dial-a-ride vehicles and cars with blue badges will be permitted to stop in the cycle lane, when necessary, to set down or pick up passengers. So accessing services on routes with cycle lanes should be similar to, if not easier than, the current arrangements for disabled people relying on car transport.

And let’s not assume that those with disabilities can’t cycle! For some people with restricted mobility, cycling has given them back their independence and freedom. Some use standard bicycles and others rely on trikes, tandems with a partner (such as people who are visually impaired) or hand cycles. But without decent, wide cycle lanes, these adapted forms of cycle are useless. Any vulnerable cyclist – whether a child, disabled or simply less confident – needs protected space to cycle in, and then they can enjoy their independence. Safe cycle lanes in Enfield will hopefully release more people to cycle who wouldn’t cycle in current conditions.

Traffic calming on high streets and residential roads can only benefit anyone with restricted mobility. High streets with less on-street parking (making pedestrians more visible), and less carriageway width to cross, have been shown to be safer places – especially for the vulnerable.

For Cycle Enfield’s inclusive cycling schemes, see this page on their website.

This site uses Akismet to reduce spam. Learn how your comment data is processed.