On Friday 14 October I was among a handful of local mums who took a cooked breakfast to the workmen on Green Lanes, Winchmore Hill, where construction has begun for the Cycle Enfield scheme. 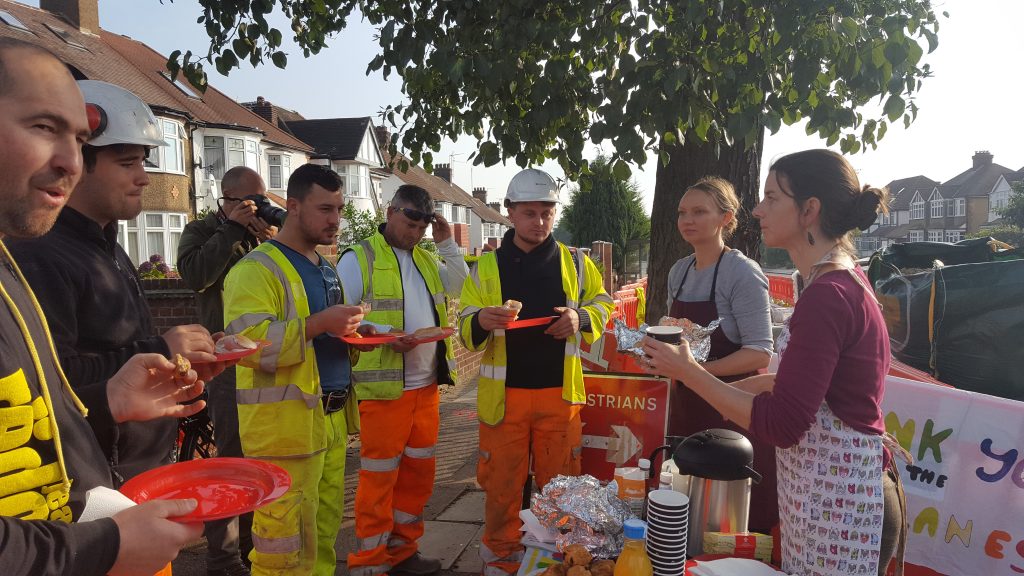 There were three of us, all mothers with children in local schools, and a seven-month-old baby. We cooked some bacon at home, made a pile of bacon rolls, and cycled them up to Winchmore Hill along with some fresh orange juice, pastries, tea and coffee to the five workmen on site. It was simple to do – and a really enjoyable morning once we got chatting to the workmen in the sunshine – but it was also a symbolic act of gratitude for the work and all who are making it happen.

We wanted to make the point that we’re grateful our streets are going to finally include some safe space for cycling. This is the start of a new era in Enfield’s history, and we know that our children will be among those to benefit most.

Currently, you never see a primary school aged child cycling on the road, and in the eight years I’ve been doing the school run locally I’ve only twice seen a teenager in school uniform cycling on the road. What you might see is a parent walking next to a child or two riding a bike on the pavement, bumping up and down the uneven paving stones, stopping at every side road, and negotiating around pedestrians. It’s slow going, and only happens when the weather is good. Having tried to get two children to school this way myself, I know how totally unsatisfactory it is. It took us 35 minutes to cycle on pavements to our primary school (from Palmers Green to Southgate), 1.7 miles away, and a lot of tears from the youngest on the uphill sections. Now that I cycle the youngest child by tandem on the road, it takes ten minutes (and she loves it). 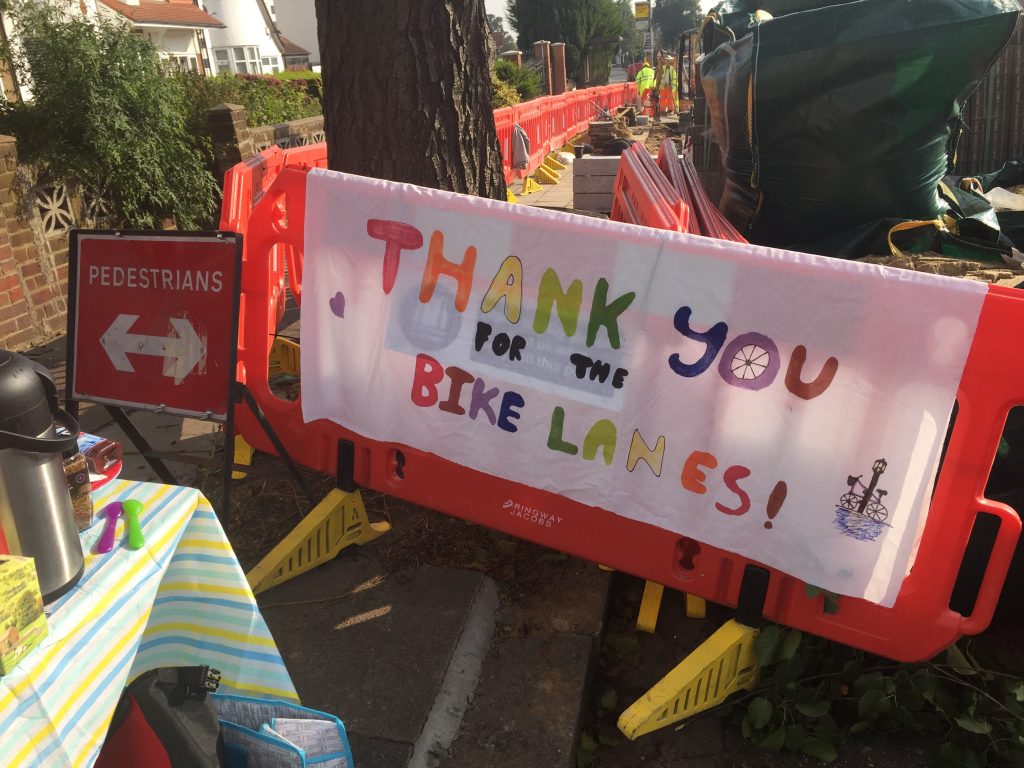 A thank you from my daughter, aged 9

Roads are far easier to cycle on than pavements, apart from the threat of traffic – so when Enfield’s semi-segregated cycle lanes remove that threat they will open up the possibility of children as young as six, seven or eight riding their bikes (or younger kids on their parents’ bikes) to school. Young teens may be able to cycle to school, activities and friends independently, and independent travel is linked to childhood well-being. And it goes without saying that getting bikes off the pavement is better for pedestrians too.

This could be transformational. A massive proportion of traffic on Enfield’s roads is school run traffic, as everyone realises on school holidays when suddenly 3pm on a weekday isn’t a log jam. The more families who cycle, the more space there will be on the road for those who really have to drive. Children can arrive at school well-exercised, and research shows that means they learn better once they’re there. Moreover, they will be better protected against obesity and diabetes, which are dramatically on the rise because our children are so physically inactive.

It was good to encourage the workmen with the breakfast too. They’ve already had negative comments from the public, including one elderly gent who told them that “90% of the community don’t want the bike lanes”, and that it will be bad for local business. (They told us that none of the complainants looked under 60.) In the face of some unpleasant opposition, the council is carrying out essential works for our health and well-being – economic as well as physical – and someone needs to recognise this. The parallel has been drawn between modern cycle lanes and Victorian London’s installation of sewers to separate clean from filthy water. The sewage works were fiercely opposed by the public at the time, but the city cracked on with it anyway. Thank God that they did, and that Enfield council is doing something just as revolutionary to clean up our streets now.