Last Friday saw the long-awaited completion of the most significant junction in the Cycle Enfield A105 scheme – the Ridge Avenue/Church Street intersection, next to Ridge Avenue Library. It’s not completely finished in every detail, but it’s operational – and that means waving goodbye to those temporary traffic lights with their inevitable queues of cars. Plus, it looks great. 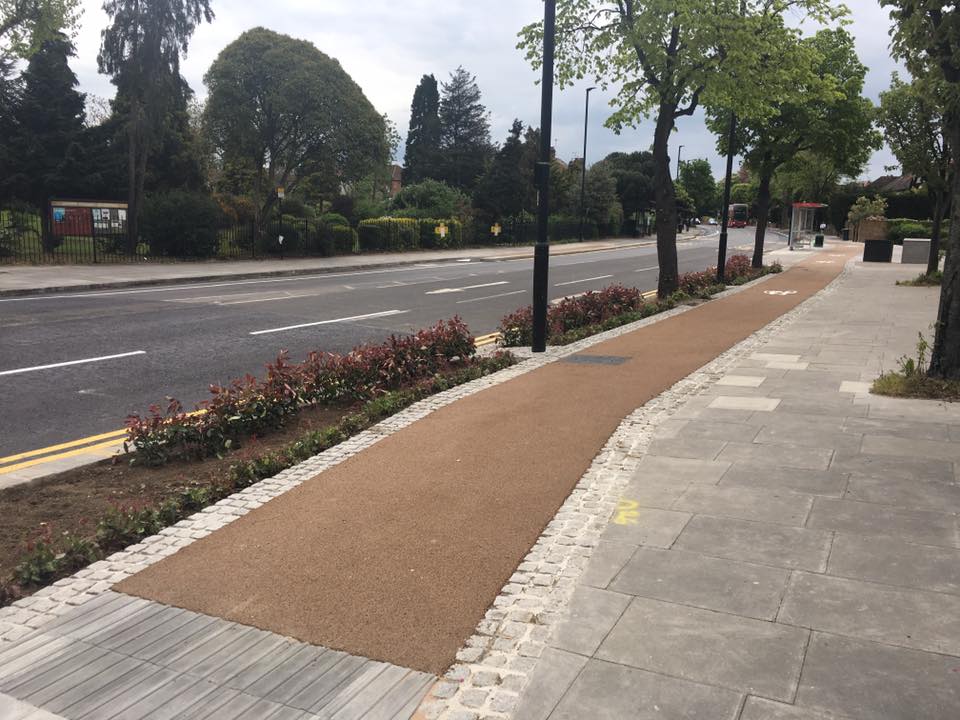 Why is this such a special junction?

The top line is that it’s now friendly to people in every mode of transport.

I have never seen a teenager dare to cycle on any part of the A105 before the Cycle Enfield scheme began, but now a child could cross this junction on a bike. That’s because there’s a cycle and pedestrian-only phase of the traffic signals – all the motor traffic stops, while people on bike or foot have plenty of time to cross safely. 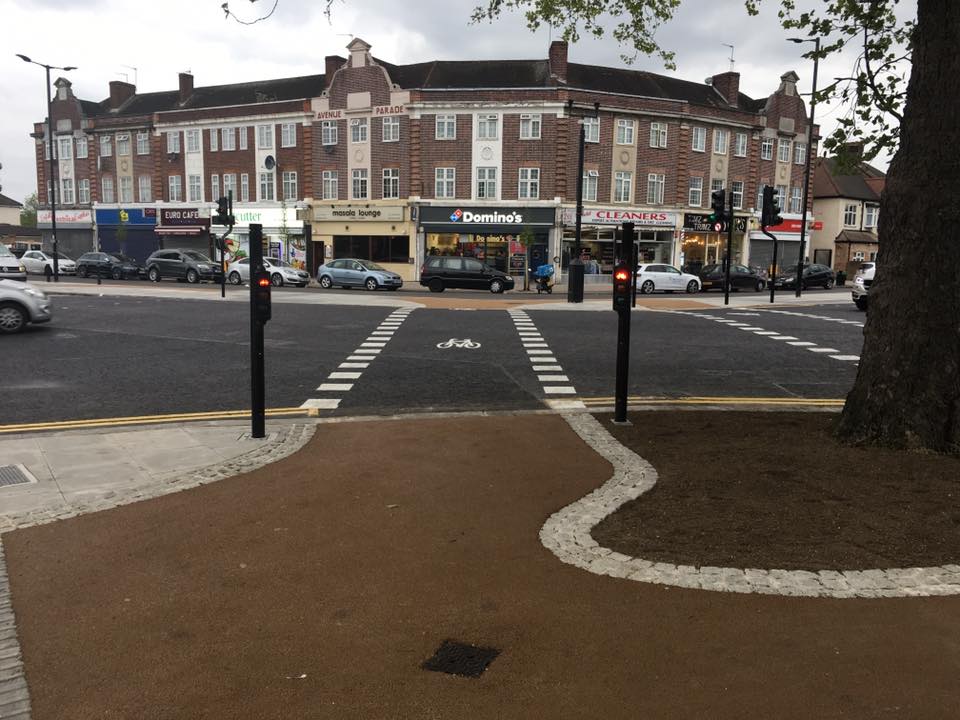 On a bike there is never a moment when you have to mix with moving cars, and on either side you are safely in the cycle lane. This type of intersection is common in the Netherlands and other European countries – it’s known as a simultaneous green or ‘all-green scramble’, since people are crossing it in all directions at once, but it’s virtually unheard of in the UK. Our traffic regulations don’t usually allow this configuration, so how Cycle Enfield designers at Jacobs got this design through I don’t know, but I’d like to shake them by the hand!

Safety at junctions is paramount, especially for cycling. That’s where the majority of collisions between vehicles and bikes take place – drivers turning left across cycles going ahead, for instance. Of course junctions can be dangerous however you’re travelling, and a crash map of collisions over the last ten years shows a cluster of incidents including, tragically, a fatality. But it’s hard to see how such an incident could be repeated in its current form. Even speeding on the A105 could be reduced by the psychological effect of a narrower carriageway (although I’m sure the most determined speedsters won’t be put off). 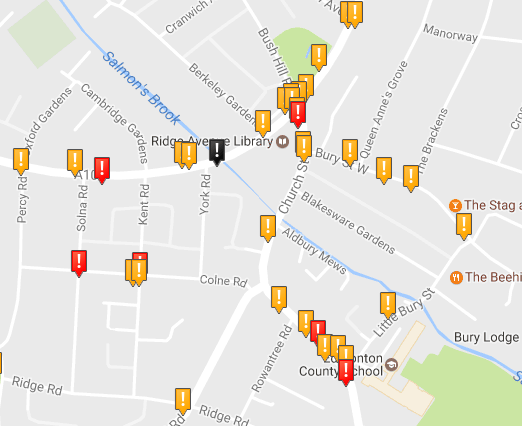 So this is a people-friendly junction in every way – people are kept safe as they travel on foot, by bike or in a car, and suddenly cycling doesn’t look like the scary option it used to be. And given that there is also a decent stretch of semi-segregated cycle lanes on either side of this junction, we’re now seeing people try it out who wouldn’t normally cycle.

Looking at the whole cycle network, this junction will also form part of an east-west greenway route from Gentleman’s Row in Enfield Town to the new development at Meridian Water.

Not only is it less likely to kill you – the street scene is a lot prettier too. Planting has gone in already, rain gardens will be installed soon (to soak away run-off rain water as well as adding greenery), the paving and surfaces are upgraded – and because the old cattle-fencing style street furniture is gone, there’s an open, spacious feel to it all. Hopefully, as people choose to maybe pause – eat their Gregg’s sandwich, for instance – rather than simply rush through this shopping area, businesses will benefit.

How to use the junction on a bike 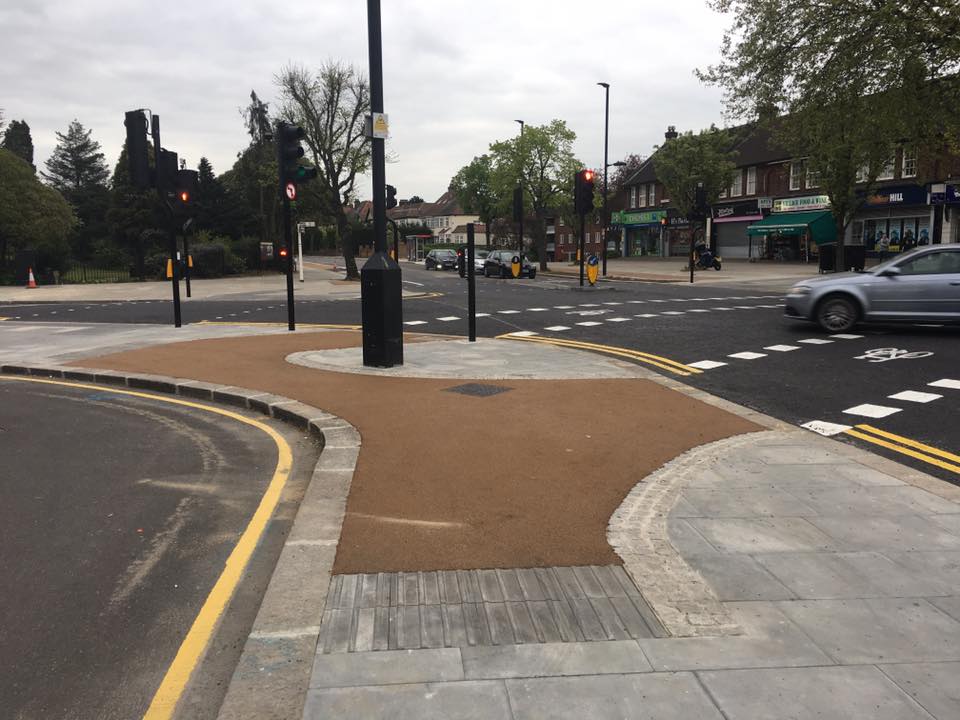 Some confusion has been reported, however. At first sight (partly because not all the signs are in yet) it’s not obvious how to cycle across this junction if you want to go straight on the A105 rather than turning left or right. Here’s a quick guide!

Coming from the south heading towards Enfield Town (see the photo above), follow the buff-coloured cycle path to the cycle crossing. It appears to be just for cycles turning right across the junction, but in fact when the light turns green you can  cycle directly north across the road and re-join the cycle lane towards Enfield Town. If you prefer, you can also use the toucan crossing to your left – it’s for bikes as well as pedestrians. But the first option is more direct.

Coming from Enfield Town and heading south towards Winchmore Hill, stay on the buff-coloured cycle path, then at the big tree – this is the odd bit – carry on straight ahead, across the pavement, to the crossing at Church Street. (That stretch of pavement is in fact shared space for bikes and pedestrians, it just hasn’t been signposted yet.) At the green light there, you can cycle across Church Street and rejoin the cycle lane on the A105.

We are thinking of posting a video guide as well – please say in the comments if this would be useful, and whether or not the instructions above make sense. 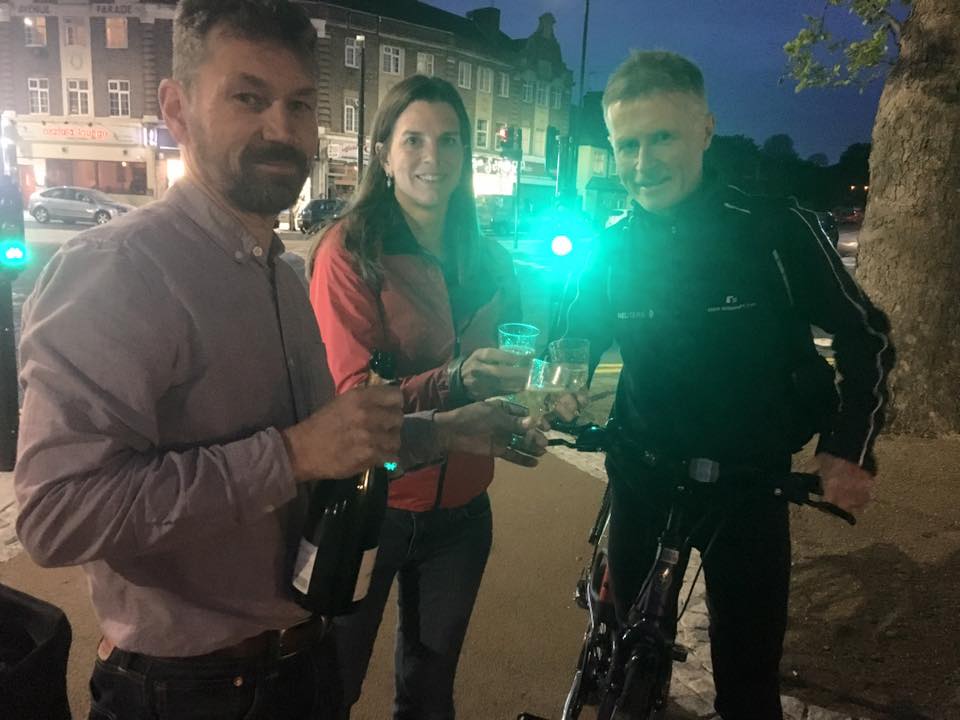