For those of us in Enfield campaigning for people-friendly streets, it was heartening to hear that an attempt to take the council to court over its Cycle Enfield scheme has failed. 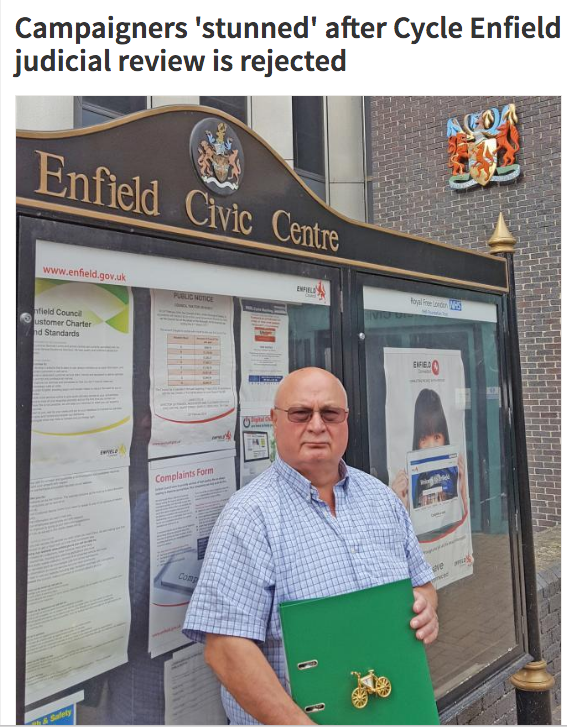 This multi-million-pound fund from Transport for London is effectively an investment in our public health. A recent World Health Organisation report urged governments to make active travel – cycling and walking – easier in our cities as a matter of urgency, or face a crisis of diabetes, cancer and heart disease that could bankrupt our health services. And NHS England has described our inactive lifestyles as a “car crash in slow motion” for the NHS.

Few people attempt cycling as everyday transport in Enfield today, because our roads are so hostile to bikes. However much we’d like to travel actively and get fit, we feel safer in our cars or on the bus. So, putting in bike lanes, bike-friendly junctions and traffic-calmed residential streets is going to be a game-changer. It means kids able to cycle to school, and adults to shops, stations, and workplaces. Physical health will be a natural by-product of going from A to B. This is exactly what the WHO and NHS England have prescribed (see also this excellent summary of a Public Health England report), and Enfield Council – in the face of our heavily car-based culture – are doing their best to get it done.

Why would anyone want to oppose this massive public health investment? Why would anyone call to ‘send the money back’ to the Mayor? Here are the recurring objections to the Green Lanes section of the scheme: that giving space to bike lanes will cause congestion; that less high street parking will reduce business and bankrupt the local economy; that crossing cycle lanes to reach bus stops will be dangerous for pedestrians, especially the disabled. Concerns are understandable, given that these are big changes, and change is unsettling for many. But each concern has been thoroughly addressed, and it’s time to move on.

For the A105, traffic modelling does not predict congestion on the new road layout, suggesting a maximum delay of 2.5 minutes across the whole route at peak hours. Reallocating part of the road to bikes is ultimately a more efficient use of space for our fast-growing population. An economic assessment predicts minimal or no negative effect on local shops; with a possible sales uplift of 10-15% in the medium term. For bus stops, we prefer the bus bypass design, where passengers have an island to stand on between the cycle lane and the carriageway. But even ‘bus boarders’ are fine, and work without incident in many continental cities as well as other parts of London. In the Netherlands they are not seen as ‘dangerous’ for disabled people. A London-based charity for people with disabilities, Wheels for Wellbeing, actively supports bus bypasses, and cycle lanes in general. After all, for a growing number of disabled people, standard or adapted cycles are highly valued aids to mobility.

Other ‘concerns’ are less noble. “You won’t get ME out of my car,” was the reason one local woman gave me for opposing the scheme. For her, though she’s young, able-bodied and has no children, driving is a lifestyle choice – like many people in the wealthy west of our borough, where car ownership rates are among the highest in the country. For this group, cycle lanes and changes to parking seem to threaten their right to drive any and every journey regardless of the cost to others. But for those households with no access to a car, especially in the east of the borough, safe cycle routes will provide a cheap, healthy way to get around. That’s social justice.

I could go on – but the point is, the council have taken these concerns into account and none of them constitute a reason to scrap the whole scheme. No street design is perfect for everyone, and there are bound to be teething problems to address as it’s put into place. So the objectors need to get round the table with the council, and with the residents who support it, and find a constructive way forward.

Making cycling and walking easier for everyone is fairer, healthier and more democratic. Let’s do it.